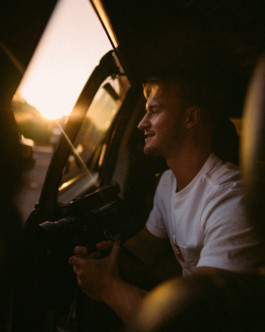 My love for filmmaking goes way back to my teenage years, shooting skateboard films with my father's VHS camcorder. Initially I was drawn to all the visual aspects of filmmaking - how one can create dynamic movements, interesting transitions and a feeling solely through lighting- and lens-choices. For years to come I continued to develop my personal style as a DP, collaborating with different Directors on a multitude of projects.

Around 2018 however, I felt a strong desire to craft my films beyond all those visual aspects that had grown so dear to my heart. The moment I picked up directing, initially as a 'Directing-DP', I was thrilled. It's about the daily challenge to come up with a new approach and suitable skill set to unlock the full potential of each and every project that comes my way. I strongly rely on the power of teamwork - the ability to collaborate and guide a roster of talented and trusted individuals is what turns good films into great ones. I couldn't be more excited to further embark on this journey.

I have to admit, though, that to this day there are still two hearts beating in my chest. The DP, that strives for highly aesthetic and creative shots, and the director that simply wants to capture authentic moments that convey a positive feeling for a broad audience. Something that feels spontaneous, effortless and never overproduced. This dualistic background however allows me to work in a wide range of environments and genres in a very hands-on manner.